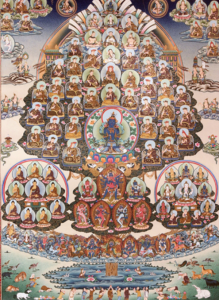 THE KARMA KAGYU LINEAGE OF TIBETAN BUDDHISM traces its origins to Shakyamuni Buddha through Marpa the Great Translator, who traveled to India three times, to bring back authentic Buddhist teachings to Tibet.

Marpa’s teacher, the great Mahasiddha Naropa, received the lineage transmission from his Teacher Tilopa and so on, back to the Buddha himself.

Marpa’s most famous student was the greatest yogi in all of Tibet, the renowned Jetsun Milarepa, who passed the teachings on to Gampopa, who in turn transmitted the teachings to the First Karmapa, Düsüm Khyenpa. Since then, the Kagyu Lineage has been headed by a succession of reincarnations of the Gyalwa Karmapa.

The line of the Karmapas is said to be self-announced, because each incarnation leaves a letter predicting his next rebirth. All great Kagyu teachers regard His Holiness Karmapa as the embodiment and source of all of the blessings of the lineage.

The Origins of Tibetan Buddhism

Prince Siddhartha Gautama, also known as Shakyamuni Buddha, the Awakened One, attained Enlightenment and first taught the Dharma in the 6th century B.C. in India. After the Buddha passed from this life into parinirvana, centuries passed before Buddhism was brought to Tibet  by the Indian meditation masters Tilopa and Naropa, and the Tibetan translator Marpa. The Tibetan poet-saint Milarepa, and Gampopa, a monk and physician who began the Kagyu monastic tradition, also played key roles in establishing Buddhism in Tibet.

The Kagyu Lineage is often called “The Whispered Lineage” because its highest teachings are still passed in an unbroken line from teacher to student since the days of the Buddha.

Karma Triyana Dharmachakra, our parent Monastery offers ongoing Teachings by these, and other masters of the Kagyu tradition.